After years of only three horses on the ranch, we have a new filly. Her name is Takoda and she came at the beginning of August.

At the beginning of August 2008, we adopted a new filly. She and eight other weanlings were brought from Idaho to the Leoni Meadows Camp in June. The owner provides the horses for camp and could not sell them in Idaho so decided to try California. We had our eye on two of the fillies, a black percheron/quarter horse mix and a red roan. Since Heather was working at camp, she was able to help us pick them out and keep an eye on them until we could pick them up. Before we picked them up, another family expressed interest in adopting one, so we decided to keep the black one.

After we brought them both home, the red roan (Oakley) was picked up by her new family. We named ours Takoda, which means “Friend to Everyone”. And it is an appropriate name. She is very friendly. She get’s along great with the other horses. We put Takoda and Brandy out to pasture together. They have become buddies.

Keep an eye on the Ranch Life blog for more information about Takoda and her adventures. 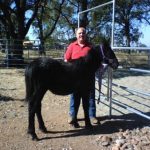 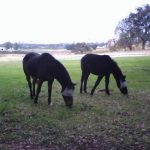